Edit
watch 01:36
We're Getting Mutants in the MCU - The Loop
Do you like this video?
Play Sound
This article is a stub. You can help Jade Empire Wiki by expanding it.

Tien's Landing is a port town that was named after the first Emperor Sagacious Tien who founded the Jade Empire. The original Tien's Landing village was one of the oldest in the Jade Empire, serving as a gateway to the Silkworm River trade route. It was even thought to be the initial stop of Sagacious Tien, the first Emperor, on his legendary journey from the uncharted east and was named as such. There are no records to prove this claim one way or another, however, and it did not protect the town from the plans of more recent leaders.

When the great drought ended twenty years ago, Emperor Sun Hai commissioned a dam to tame the fast flowing waters of the Silkworm River. The resulting reservoir flooded the basin of Tien's Landing. Ample warning was given, and the village was resettled further up the river, but some of the more undesirable residents were apparently abandoned to the water. Shame over this event is cited as a reason Tien's Landing has not yet regained its former importance.

After crash landing in the haunted ruins of Old Tien's Landing, the Player character and party must find refuge in the nearby town of Tien's Landing. As the Player enters the town, the group is told that the town is starting to rot because the water has been cut off by of the Great Dam being opened, leaving sailors stranded and angry. At the same time, the Great Southern Forest is haunted, cutting off traders entering the town. The Player is assigned the task of either closing the dam to bring back the water flow or destroying the control mechanism so that the dam can never be closed again. If the Player chooses to close the dam, the town will once again have access to the sea, but if the dam is destroyed, the town will continue to suffer. There are also numerous other NPCs in need of your aid around the town.

There are four main locations in Tien's Landing; the Teahouse, the Boathouse, the Docks/Marketplace, and the Common Area.

Tien's Landing is a fishing town with access to the Glass Sea. It is usually prosperous as long as there are no elongated droughts, The old Teahouse is the heart of the town where fishermen and commoners alike can relax and have a good time. Sailors stop by Tien's Landing to rest and also cause an influx of income to the town's merchants, but not without consequence. 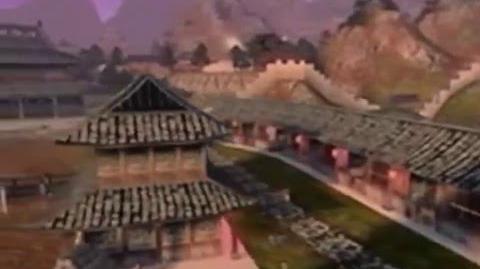