"In my youth I ruled dutifully, but nature does not respect titles. Withering drought not battle, threaten to take my throne. But I would not allow it! I assaulted the underworld and claimed the great Water Dragon, neither the treachery of my siblings nor my failing body could stop me! I am no longer a slave to time's decay! My actions have brought the Empire great strength and its Emperor endless power! Who among you would dare challenge my right to rule?"
-Emperor Sun Hai

Emperor Sun Hai is the current Emperor of the Jade Empire and one of the main antagonists of the story. Formerly an honorable and dutiful ruler, he has over time become reclusive and completely corrupted by his lust for power.

Emperor Sun Hai holds dominion over the Jade Empire. At the height of his power the Long Drought destroyed crops, livestock, and even entire towns. It seemed as if the Empire itself might fall, when Emperor Sun Hai miraculously brought water back to the starving land. How he did it is an enigma, but the people rejoiced as the rivers rose once again and rain waters began to fall. Also, after the end of the Long Drought there was a rise in the appearance of spirits and ghosts, much to the distress of the general people. It is generally perceived in the Empire that the Emperor is very strong and powerful. He is also feared by the general populance, especially with presence of the Lotus Assassins. However, there is also a feeling in some quarters that the Emperor was being misled by the terrible Death's Hand, the leader of the Lotus Assassins and not completely aware of the troubles of the empire's populance. Most dissidents disappear without a trace.

Emperor Sun Hai's dynasty was to be destroyed by the Long Drought, as was destined. However, as advised to him, the Emperor decided to turn tables on destiny by forcing the end to the Drought, irrespective of the price. Accompanied by his highly skilled brothers and the Imperial Army, the Emperor Sun Hai assaulted the Temple of Dirge to capture the Water Dragon. Once the Temple of Dirge was destroyed and its protectors the Spirit Monks annihilated, Emperor Sun Hai cut open the body of the Water Dragon and its magical waters ended the Long Drought. But in the process, the dead of the land stopped proceeding to the completion of their cycle of life and death since the 'shepherd' of their spirits after death -- i.e., the Water Dragon -- was trapped through her defilement and was also having her powers drained by use of her heart. Since the Water Dragon's essence was too potent for any mortal, Sun Hai could only draw power from the Water Dragon's heart slowly although it took a great toll on his body.

Fearing that Sun Hai's reign as a god-emperor would be chaotic and violent, Sun Hai's brother Sun Li conspired with their brother Sun Kin to assassinate Sun Hai. Despite Prince Sun Kin plunging his sword in Sun Hai's back, he did not die and with his godlike powers overpowered his treacherous brothers. Sun Li fled the battle while Sun Hai bounded Sun Kin's soul to Sun Li's armor; thus enslaving him as Death's Hand. While Sun Li murdered the newborn Last Spirit Monk's guardian and raised them as his own under the guise of a benevolent master, Sun Hai became a recluse and disappeared from the public eye. In revenge for Sun Li's treachery, Sun Hai ordered the Lotus Assassins to murder Sun Li's wife and newborn daughter. While Sun Li's wife was executed, Sagacious Zu smuggled the daughter to safety and she was raised as Dawn Star.

Twenty years later, the Emperor sent his Lotus Assassins to attack the village of Two Rivers in order to apprehend his missing brother Sun Li, who has long evaded him and also his protege, the Last Spirit Monk. He had also sought to acquire the Dragon Amulet so that he can absorb large quantities of the Water Dragon's power more efficiently. Over the course of his reign, Emperor Sun Hai has gone mad with power and his reign increasingly tyrannical. Though fully aware, the Emperor has turned a blind eye to the consequences of imprisoning the Water Dragon. The Emperor planned to construct a vast army of Golems, created from the spirits of murdered slaves in order to solidify his rule. Emperor Sun Hai's health eventually failed him but with the Water Dragon's power sustaining him, he became a spirit himself. The Last Spirit Monk eventually confronted Sun Hai in his Imperial Palace and defeated him in single combat, toppling the tyrant once and for all.

Immune to whatever fighting styles type he is currently using. 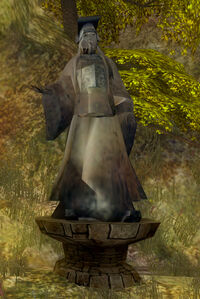