"I have moved with you, hidden, trying to keep focus. I give you all that I am, all that I was. Restore what has been corrupted".
–Sagacious Zu

Sagacious Zu was once a member of the Lotus Assassins. He joined the Order of the Lotus prior to its reorganization under Death's Hand. Zu was, unlike most of his Order at that time, not at the siege of Dirge, but instead given the order to execute Sun Li's family after learning of his treachery. Zu hesitated, however and the rest of his team killed Li's wife, but he would not let them kill Li's newborn daughter. Instead, Zu murdered his team and escaped to the Imperial City with the girl. He took care of her for three years, before handing her over to Hui the Brave, who ultimately sought out Master Li, whose true identity remained unknown to Zu (just as Hui was unaware of the child's true parentage).

Sagacious Zu has been living in exile as a hermit in the marsh. During the Player character's investigation of Dawn Star's kidnapping, the Player encounters Sagacious Zu as he fights off several of Gao the Lesser's men. After hearing about Dawn Star's kidnapping, Sagacious Zu agreed to aid the Player in rescuing her and helps them navigate the swamp. They track down Gao and his men to a cave where the Player and Gao have a final showdown. After Dawn Star's safety was secured, they've discovered that the Two Rivers was attacked by the Lotus Assassins and Gao the Greater. Sagacious Zu is hesitant to intervene but follows the Player there anyways. The Player and his comrades return to the village to defend it and drives off Gao the Greater's men. Yet the Two Rivers School fell to the Lotus Assassins and many students were killed in the attack. Master Li is believed to be held captive by the Lotus Assassins and so the Player resolves to rescue him. In the aftermath of the battle, Sagacious Zu reveals that he was a Lotus Assassin, and the fact that he knows that they leave no survivors was the reason he was hesitant to intervene. Sagacious Zu sees that dissuading them would be futile and decides to accompany them in hopes of at least directing them in a positive direction. The party decide to head for Imperial City. To get started, they used one of Gao's flyers to travel to Tien's Landing where they hope to get passage to Imperial City. Zu seems strong in his convictions, but his loyalty to the Player cause is not as apparent.

Muscular, but not in the shape of a disciplined fighter. Still skilled and healthy but not as constantly trained as he once was.

"All I can say is, at least we got paid, or that could have been the biggest waste of time I've participated in."
–Sagacious Zu to the Player

His troubled past has left Zu a cold heart; he often opts for getting things done quietly and isn't quick to forgive. He tries to not care about anything to avoid situations that would force his conscience to act. However, his insight is always valuable and should be considered carefully. As he was trained, Zu always believes that he is being watched at all times; a philosophy, he says, that has saved his life many times in the past. As he grows in his trust towards the Player, he becomes noticeably more light-hearted; yet the secret he bears about the origins of the child he saved continue to wear down on him.

Zu first joins the Player when he or she seeks out Dawn Star in the swamp north of Two Rivers- his reason for doing so is because he does not believe that she deserved to be kidnapped. When Two Rivers and the school are burnt down, he reveals that he was a Lotus Assassin and the fact that he knows that they leave no survivors was the reason he was hesitant to intervene. Through encounters with Hui the Brave and Inquisitor Lim, the Player learns more about Zu.

Midway through Chapter 3, Zu, following an argument with Silk Fox over whether or not the party should enter the Lotus Assassin Fortress, leaves for the fortress on his own and evades the Watcher. He advises the Player throughout the infiltration and gives cryptic hints about what is to come, as well as the most important revelations about his past. During when the Player is trying to get a spirit shard, Zu apologizes to the Player, telling him/her that this is the only way for him to be sure before the player is attacked by a powerful ghost. When Death's Hand arrives, coming out of the fountain about to kill the Player, Zu shouts "look out" and then proceeds to hold him off for a few seconds, telling the Player to run away. Death's Hand fatally stabs Zu, but not before accidentally slicing into a set of load baring pillars, resulting in the chamber collapsing on both of them, which was Zu's plan all along to save the Player.

Zu eventually appears again during the Player's final confrontation with Master Li. It is Zu, having managed to maintain his sense of self even after his death to remain a strong spiritual force, who manages to release the Player from the Sun Li's final trap.

He despises brutality and blunt actions, yet he is a true follower of the Way of the Closed Fist, believing in self-reliance and demonstrating one's own strength and ability to overcome obstacles. He still lets the Player to see his dark sense of humor when you rescue Fen the Flower of the Fields and also repeatedly comforts Dawn Star after discussing with Silk Fox just after you met her, and right before asking the Inquisitor or Executioner Recruiter how to join.

The Secrets Of Sagacious Zu[]

The Secrets of Sagacious Zu is an unofficial quest that takes place throughout the entire game and will only be completed if you make the correct choices along the way.

In the Chapter 1 you first realize that Sagacious Zu has a secret upon his reaction to hearing Dawn Star's name. Only then does he choose to help you. You are unable to find out why until later on in the game.

In the Chapter 2, after helping Hui the Brave fight a group of sailors, a conversation takes place between Zu and Hui in which they talk about a child that Zu placed in Hui's care some time ago. When you return to the camp area, a conversation occurs between Zu and Dawn Star wherein he asks what she remembers about her childhood. It is repeated that Dawn Star was named for a glow caused by the burning of Dirge, something that she views as an ill omen. In the confrontation with Inquisitor Lim, Zu is mentioned by name as a figure deserving of scrutiny. These are hints that you should talk to him.

You must complete a series of conversations to advance the plot. They are generally impossible to fail unless you explicitly tell Zu to be quiet.

During the Player's talk with the Water Dragon; before being resurrected he/she is told to exploit whatever advantage they have. The Water Dragon can sense what Sagacious Zu said about Master Li's child in his/her mind. If the Player says he/she doesn't know how to find this child, the Water Dragon mentions Dawn Star was named for the burning of Dirge and that it was only visible from the palace. Therefore, Dawn Star must have been born in the palace, and thus revealing that she is Master Li's child. The same child that Zu had spared 20 years ago and handed over to Hui the Brave for care.

After the Player's resurrection, there is a chance for the Player to speak with his/her followers. The vision of the Water Dragon that lead them to Dirge also revealed Dawn Star's status as Master Li's child. The Player may or quiet her as he/she sees fit. After the Death's Hand battle, the PC can attempt to use the information to appeal to Master Li (to reach his honorable side), or use it against him (to weaken him so he can be attacked). Master Li first dismisses this, and then declares that it isn't important to him. If it was ever important, he would have died protecting her in the first place.

In the final confrontation with Master Li, if Dawn Star is present, she asks if she should speak to Master Li as a daughter.

Master Li again dismisses the significance of this, clarifying that he never really cared about his family, only the power he sought. 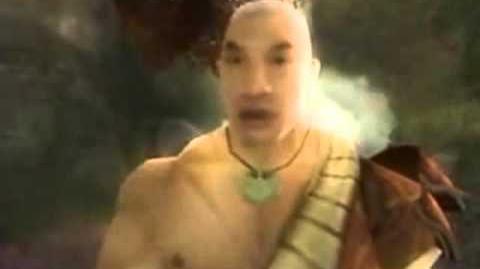 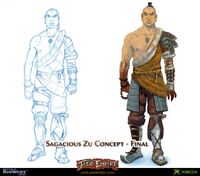 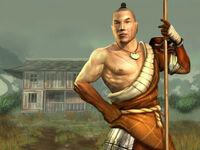 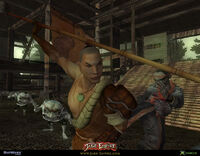 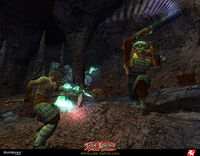 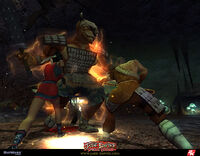