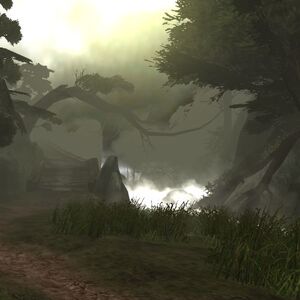 The quest called "The Sickened Forest" is one of the main quests of Chapter 2, being necessary to obtain a wind map for the Marvelous Dragonfly and progress to Chapter 3. It requires that players go to the Great Southern Forest and assist Lord Yun, its steward.

There are three ways that this quest can be received. Firstly, players can talk to a messenger in Tien's Landing who has been sent to find help. Secondly, Silk Fox can direct players to the forest (if they have not already been there) after they have obtained the Inscrutable Power Source from the dam site. Thirdly, players can simply enter the forest on their own initiative. Either way, the main part of the quest begins when they go to the forest and speak with Lord Yun about the malaise which seems to be affecting the area. Lord Yun came by flyer from the Imperial City to deal with the issue, and therefore is in possession of a wind map — he promises that if players can help him, he will provide them with a copy of the map despite the attempts of the Lotus Assassins to limit the availability of such knowledge.

Lord Yun mentions a being known as the Forest Shadow, a Fox Spirit who has traditionally been a guardian of the forest. He suspects that she has some connection to the illness affecting the area, although does not know whether she is a cause of it or a potential ally against it. Lord Yun's chief hunter, Spear Catches Leaf, has been sent to a temple dedicated to the Forest Shadow, and Lord Yun suggests that the player should go there and see what has been established.

The temple and the inn[] 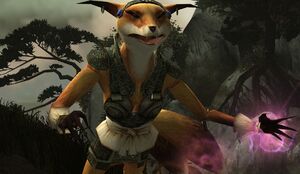 As they progress uphill through the forest, players come to a bridge. There, they meet a man being attacked by Lost Spirits. Once they are defeated, the man tells players that he has been sent from the Pilgrim's Rest Inn, where he says people have been trapped and are in danger of starvation. He urges the player to make for the Inn immediately, but is then attacked and killed by a fox spirit, who turns him to stone. The fox spirit attempts the same with the player, but the magic fails to work — confused, the fox spirit retreats.

Once players confront the Keeper either about the crystal or about what Hou said, the Keeper says that because he wants the Forest Shadow dead, he stopped Spear Catches Leaf from performing the ritual. The Keeper wants the ritual to be performed by someone who will kill the Forest Shadow when they reach her, but Spear Catches Leaf would have simply talked to her peacefully. The Keeper says that if the player agrees to kill the Forest Shadow, he will give them the crystal and let them perform the ritual, but that he will not surrender the crystal otherwise. If players agree (honestly or otherwise), they receive Quest: Fox Hunt. If players refuse to be part of the plan but demand the crystal anyway, the Keeper and the patrons of the inn will attack. The confrontation may or may not involve the Keeper and the other people at the inn revealing what they truly are — if it does, players also receive Quest: Cannibals in the Inn at this point. 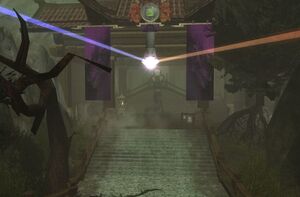 Regardless of how players obtain the crystal from the Keeper, and regardless of what they plan to do, the next step is to perform the Ritual of Seasons at the temple, which will open a portal to the Forest Shadow. The specifics of the ritual have been forgotten, as Lord Yun has not paid as much attention to the temple as his forebears did. Spear Catches Leaf says that the key is in the colours associated with each season, and gives the old rhyme: "Winter skies are crisp and blue, while the fields of spring are green. Summer's heat is burning red, while in autumn, yellow leaves are seen." He further says that summer and winter are traditionally seen as the seasons which most affect a forest. Also, the purple banners around provide a clue, as does the scrollstand inside the temple itself which mentions violet.

To perform the ritual, players need to first return the crystal to the pillar it was stolen from, and then activate the machinery associated with the two furnaces below the temple. The light from these furnaces is focused into beams, which are aimed at two small towers closer to the temple, on either side of the crystal's pillar. Players can then raise and lower lenses from these towers which tint the light and focus it towards the front of the temple — one tower has red and green lenses, while the other has yellow and blue lenses. To proceed, players must activate the red and blue lenses, which combine to produce purple light. (A wrong choice causes Lost Spirits to appear.)

Once the correct light has been created, the player needs to use the pillar on which the crystal was placed. This causes another lens to lower, focusing the purple light to the back of the temple. This causes a portal to the Forest Shadow's portion of heaven to open, allowing players to step through. 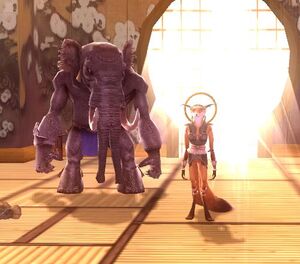 On the other side of the portal, the Forest Shadow's people are being attacked by demons, who also attack the player. After players have fought their way up to the top of the area, they meet the Forest Shadow herself, along with her guard Shining Tusk.

Regardless of their choice, Lord Yun will reward the player with a copy of his wind map, which is necessary for the player to reach the Imperial City.