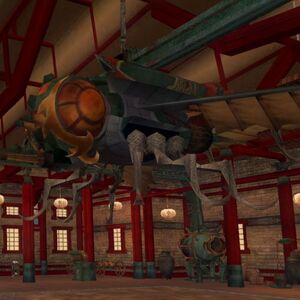 The quest called "Find a New Flyer" is one of the main quests of Chapter Two, being one of three things that must be done in order to progress to the next part of the game. It requires that the player obtain a flyer, the Marvelous Dragonfly, from the pirate lair of Gao the Greater.

The quest is obtained automatically when players arrive in Tien's Landing. As they enter the town, they will meet Yeung Yifong, who will mention that the area is being menaced by pirates with flyers — this clue as to where a flyer can be found is the beginning of the quest. Yeung Yifong will direct the player to Minister Sheng, the official in charge of the town, for more information.

Getting to the pirate lair[]

Minister Sheng's primary concern is closing the Great Dam, but he will also tell the player that if they wish to confront the pirates, Ru the Boatswain is probably the only one who would be willing to make the journey. Ru can be found in the Teahouse, on the upper floor — he has volunteered for the dangerous task of closing the dam, but is now drunk, saying that he needed "a drink or two" to get his courage up first. Yanwan, the waitress, says that he has been delaying the attempt for three days, but Ru insists that he will get around to it eventually. When players ask him for transport to the pirate lair, Ru says that he cannot help until his task with the dam is done. If players have already resolved the issue themselves, they can say so, and Ru will concede that he is free to assist them. Otherwise, players will need to convince him to abandon his plan, either by passing a Charm or Intimidation check or by taking responsibility for the dam themselves.

Once Ru has agreed to provide transport, he can be found at Beggar's Pier, in the southeastern part of Tien's Landing. Players can travel to the pirate lair by speaking to him there. 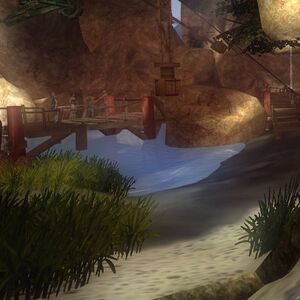 Ru takes the players to a small beach on the edge of the pirate lair, where he says he will wait. A short distance from this location is a small dock, on which several pirates are standing — players observe them bullying one of their servants. The servant, Cheung, then slips away and begins working at a rope tied to a nearby tree — the rope is suspending a heavy cannon over the dock, where it was being unloaded from a boat. Cheung is unable to break the rope himself, however, but when players interrupt him, he suggests that it would be a convenient way of getting rid of the pirates. However, there is also an innocent slave on the dock, and he would be killed as well. If players drop the cannon, they receive Closed Fist points. Otherwise, they need to fight the pirates themselves, prompting thanks from the slave before he disappears.

After the pirates on the dock have been dealt with, players can speak further with Cheung. He tells them that he used to be a pirate himself, but that Gao the Greater's new order has changed things, leaving a newer generation in charge. According to Cheung, the Guild had always ignored the pirates until Gao arrived and took personal charge, changing the focus of their operations to emphasise slavery. Gao also formed an alliance with the Lotus Assassins — Cheung suspects that the flyers Gao builds are primarily for their use, with their use for piracy being just a cover. The assassins in the area are led by Inquisitor Lim, who Cheung believes has "something very wrong" about him.

Players are then able to continue on through the pirate lair. After fighting their way through a room containing seven pirates, they come to the cavern in which the pirates imprison those they have enslaved. At this point, the pirates are attacked by a previously unseen warrior dressed in blue, who tells the pirates that he and the player are on the same side — a fight commences. Once the pirates have been defeated, the warrior in blue apologises for involving the player, but says that they clearly have similar interests. He introduces himself as Sky, and if players guess that he is seeking Gao the Greater, he will confirm it, but not give his reasons. He says that if either he or the player are to make progress, they will need to cooperate for a moment — the door which leads out of the cavern, designed by Kang the Mad, requires two people to open it. Once players have agreed to this, Sky activates a lever while the player works the mechanism on the door itself, resulting in the door being opened. Sky then goes his own way.

(Also in this area is Yeung Yifong, whom players will have met as they were arriving in Tien's Landing. She and her daughter Fuyao were captured by the pirates to be sold as slaves, and she asks the player for help in finding her daughter, elsewhere in the pirate lair. This is a separate quest.) 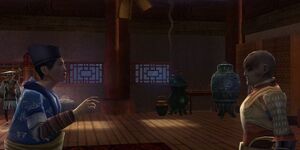 On the other side of the door, there is another fight with pirates. After defeating this group and climbing some stairs, the player arrives at a building and overhears a conversation — Gao the Greater, Inquisitor Lim, and Kang the Mad are all present, and Lim is speaking with his superior, Grand Inquisitor Jia, through some form of magical device. Lim assures Jia that he will be back in the Imperial City with the Dragon Amulet shortly, but Jia is unimpressed with his performance, saying that he should have returned already and that he does not seem to be handling the situation well. When Lim implies that Gao's flyers are not adequate for his needs, Gao reacts angrily, saying that he will deliver a new, superior flyer on schedule. This in turn prompts an outburst from Kang the Mad, who is the designer of the flyer and who is angry at Gao taking the credit. After the conversation with Jia is over, Lim informs Gao the Greater that his son, Gao the Lesser, was killed — Gao the Greater leaves, commanding that he is not to be disturbed. Lim then leaves himself, instructing Kang to resume work on the flyer.

After this cutscene ends, players can enter the room themselves. It is now occupied only by several ordinary pirates and by Kang the Mad. When Kang notices them, he throws an incendiary device of some sort at the pirates, making it easier for players to defeat them. After the fight, Kang tells players that he is not a willing collaborator with Gao or the Assassins, and has taken steps to ensure that they will not be able to misuse his "special creation", the Marvelous Dragonfly. Wishing to free himself of service, and believing that Gao will eventually have him killed anyway, Kang offers to work with the player — if the player "stages a combat-related accident for Gao, like falling down a flight of punches", Kang will restore the Marvelous Dragonfly to operability and put it at the player's disposal. Kang says that he will meet up with the player again once Gao has been dealt with.

After the encounter with Kang, players can proceed further up the hill, fighting another group of pirates soon afterwards. (At this point, players have the option of entering a cave where they can find Fuyao — this is necessary to complete the previously mentioned sidequest, but is not required for the main quest). Still further up, another group of pirates will be heard saying that Gao the Greater passed by. After this, there is a map transition.

Players then arrive at the main flyer workshop, where they will have to fight a number of pirates as well as demons summoned by Gao the Greater. The Marvelous Dragonfly is suspended inside the building — players can drop it to floor level by operating some controls (which also causes the opening of a side door to a treasure room), but cannot yet use it — Kang needs to replace the part he removed to sabotage it, and the hangar roof needs to be opened. Players must therefore continue upwards to the top of the base, where Gao the Greater's private chamber is located. 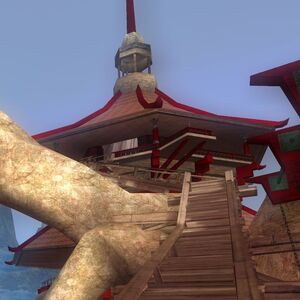 Gao the Greater will be inside, and will promptly attack the player when he realises that they were responsible for the death of his son, Gao the Lesser. Players may also encounter Inquisitor Lim here, depending on the order in which they are undertaking quests — this quest, The Sickened Forest, and The Great Dam are all necessary for the player to proceed, and Lim will be present in whichever of them the player does last. If he is present here, he will be telling Gao his son "may not be lost forever" due to the power of the Lotus Assassins over the dead, and will fight the player alongside Gao. If Lim is not present, Gao will instead be assisted by three of his pirates.

After the fight has been won, Sky will appear again, expressing regret that he was not able to participate directly in Gao's death. He explains that Gao's slavers killed his daughter for resisting them, and that he had been pursuing Gao for revenge. Sky also says that while making his way through the pirate lair, he came across documents belonging to Gao — these indicate that the Lotus Assassins were his primary customers in the slave trade, and Sky now hopes to follow the trail to the Imperial City and put a end to those who he holds ultimately responsible for his daughter's death. He says that by working together, he and the player stand a better chance of defeating the Assassins.

Sky also shows the player a mechanical part he stumbled across, which Kang, arriving on the scene, identifies as the part he had removed from the Marvelous Dragonfly to disable it. Kang takes the part and returns to the Marvelous Dragonfly to restore it to working order. By the time players have followed him, he has replaced the part, and says that the player can now use the flyer as their personal transport. If players want to travel long distances, however, the Marvelous Dragonfly needs to be equipped with an Inscrutable Power Source, and they would need to possess a wind map — Kang is able to pilot the flyer back to the player's camp at Tien's Landing, but without those things, reaching the Imperial City is not possible. Kang insists on remaining with his creation, and will accompany the player for the rest of the game.

If players have already obtained an Inscrutable Power Source (which is found while undertaking Quest: The Great Dam and/or Quest: Hui the Brave), they can give it to Kang as soon as he mentions it. Otherwise, this quest will remain active until they find it.