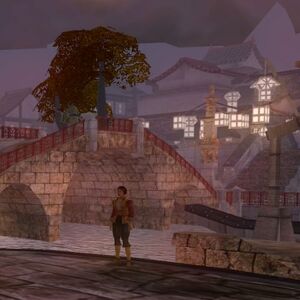 The Market District is part of the Imperial City. It contains the Imperial Arena and a landing spot for flyers, the latter becoming the player's camp while in the city. There are a number of merchants, although the only one relevant to the player is Tseng the Blacksmith. From the Market District, players can access the Golden Way and the Black Leopard School. The gates to the poorer districts are sealed at the time of the player's visit — Captain Sen says that this is because the area on the other side is still undergoing repairs after one of Fading Moon's arson attacks. Players are not able to visit these areas in the game.

The Market District is the first area that players will find themselves in once they arrive in the Imperial City from Tien's Landing in the Marvelous Dragonfly. Upon arrival, they are stopped by two guards, who have been ordered by the Lotus Assassins to monitor new arrivals. However, their questioning is interrupted by the arrival of Princess Sun Lian, who players recognize as Silk Fox. Sun Lian dismisses the two guards and arranges to meet the player in the Scholar's Garden. (If players were impolite to the Princess, they will also be approached by Long the Lout at the end of the conversation.)

Subsequently, there are a number of quests that can be obtained in the Market District. Three of them are acquired by talking to Captain Sen — the captain offers bounties on Creative Yukong and Fading Moon), and if players complete these, they will be approached by another man asking them to find Aishi the Mournful Blade). None of the people needing to be found are in the Market District themselves, however. Later on, once players have progressed sufficiently through the chapter, there are two further quests which can be obtained: Prefect Jitong will ask players to help obtain evidence about slave traders, while a girl named Jinlin will ask for help in retrieving something from a tomb in the Necropolis. Players can also talk to Mechanic Hin Goo about a flyer mission, which results in improvements to the Marvelous Dragonfly.

Players can also talk to Bai the Outcrier, who is found near the flyer, and to Junda and Lina, who have a stall in the southwest of the district. They are not involved in quests, but may provide a certain amount of information on the surroundings.

There are two bookstands in the Market District — The History of Flight (Vol. 4) and Guide to the Imperial City. 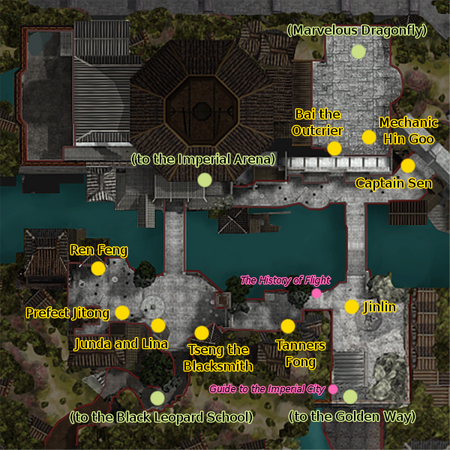