Words are only wasted describing these equine horrors, for their appearances are all too easily recalled from the nightmares of childhood. All the legends talk of these beasts' fiery manes and terrifying strength, but few sources delve beyond the lore to seek out the fact. It was a most fortunate happenstance that led this author into a roadside discussion with the venerable Li Shi Tun, a master warrior who had recently destroyed one of these beasts. His insight proved most valuable, for it was this master who first made clear the true effect of the horse demon's terrifying mane. Holding out blistered hands, the ancient warrior made his point most clearly: to strike a creature who controls elemental fires with such ease is to strike the flame itself. One must be prepared to hurt themselves with each attack".
–Jade Empire Bestiary, Volume 5, scroll stand located within the Heaven realm, accessed by completing the Ritual of Seasons, in the Forest Shadow Temple.

Horse Demon is a transformation style. You gain transformation styles by seizing the spirits of creatures you defeat in combat, in this case a Horse Demon. These styles are very powerful, but they drain Chi quickly and lack the mobility of other styles—so you have to be careful about when you use them. Horse Demon is an occasional enemy in Jade Empire. They sometimes accompany more powerful enemies as support, though they are formidable enough to fight alone due to their command of fire-based magic.

Standing on its hind legs, a horse demon is roughly the size of an average human: taller than a Rat Demon, though smaller than a Toad Demon. Their blackened, emaciated bodies are topped by a hideous equine skull graced with a flaming mane. The creature's reverse-jointed legs end in horse-like hooves, while its arms end in articulate hands tipped with demonic claws.

Despite its relatively smaller size (as compared with other high-level demons), the horse demon still poses a great threat in battle and may be one of the more dangerous of the demons one encounters. First encountered either in the Pirate Base or the Forest Shadow's Heaven, their flaming manes damage you when you attack them with either martial or weapon styles, leaving the Player with limited options of assault due to their magical and support resistances. Their main methods of attack consist of trampling hooves, claws, fireballs and area attacks that cause blades to thrust out of the ground. Once they are defeated, they will explode, damaging anyone within the radius, especially the Player.

When the Player enters the Forest Shadow's Heaven, they will encounter Horse demons along with Toad demons attacking the Fox Spirits. If the Player can defeat the demons, the Horse Demon Style will be gained.

In this form, the character has all the abilities of a Horse Demon and can use them for as long as the character's chi reserves hold out.

Powerful warriors can gain the power to take the form of the fearsome Horse Demon. This transformation grants the Horse Demon's legendary ferocity, as well as its mastery of the element of fire and its immunity to the effects of Support styles. Faced with the immolating brutality of the Horse Demon, weak-willed foes cower in fear, helpless against the raging flames.

Power Attack - Sends a fireball that damages and immolates its target.

Area Attack - You stomp the ground, from which a number of spikes emerge. 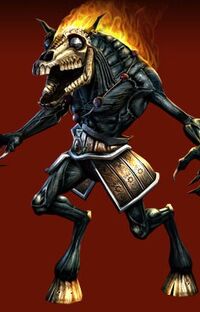 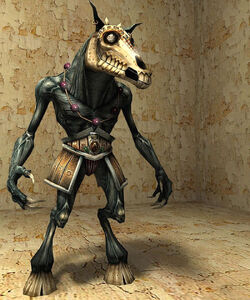