"As I mentioned, I am but a simple bun master, with a dear wife who has turned my life into a miserable cesspool devoid of humor and excitement. Bless her soul".

Life has not been too kind to Hou. In his youth he was a master of the rare martial style Drunken Master, which is only useful when large quantities of wine have been consumed. After becoming a top ranked arena fighter, the toll on his body soon left him destitute. He spent the next three years doing odd jobs including cleaning creature cages. One day a promoter offered him a generous contract. Instantly signing it, Hou managed to work his way back to the top, yet his celebration was short lived when the promoter revealed to him the small print of the contract - he must marry the promoter's niece.

She had plans for him herself and repeatedly commanded Hou to stop fighting and drinking. Hou ignored her demands until his "duplicitous dove" spiked his wine prior to an important match. His loss was apparently both spectatular and severe since he was forced to submit to his wifes "tender ministrations". Upon his recovery Hou reluctantly agreed to give up his livelihood and instead become a Bun Master. Because as he notes, "It is a hard thankless job that keeps me busy, very, very busy".

Hou often personally delievered his own buns thus getting him away from his wife for extended periods of time and it was apperently on one such trip that he was waylaid by cannibals allied with The Mother and had taken over the Pilgrim's Rest Inn. Since he was too skinny to eat they decided to keep him around in an effort to make the Inn seem more 'normal' to the few individuals who made it to the Inn, where they were quickly taken and either transformed or eaten. Whilst traveling around the Jade Empire, Hou is repeatedly reminded of his wife, who he expects has destroyed the Imperial City looking for him. He also has collected some rare turtle eggs, an insulting gift in the Jade Empire, for his wife's coming anniversary and offers them to the player in one variation of a story quest.

During the siege at Dirge, Hou and Black Whirlwind join forces, with Hou's wine fueling the Black Whirlwind's one man assault on the invading Lotus Assassins and their golems.

Henpecked Hou's wife finally tracked him down and brought him back home to settle back in to the simple bun master's life. A few years later, he became a father for the first time. Though having septuplets at his age was not unheard of, having seven daughters at once was a bit peculiar. Shortly thereafter, Hou became deathly ill after accidentally eating a bun he intended to give to his wife. Hou's wife invited her entire family to live with them while he was bedridden. Hou recovered more quickly than expected, but word of his poisonous bun made sure that his career as a bun master was over. Instead, Hou became a delivery man, delivering packages throughout the Empire. He has yet to return from his first delivery. 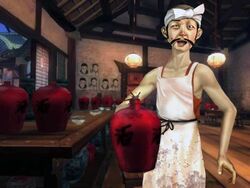