The Golden Way is one of the richer areas of the Imperial City, being home to a number of noble families and to the city's artistic establishment. It connects to the Market District in the north, the Necropolis in the west and the Scholar's Garden in the south.

The Golden Way is accessible from the Market District as soon as the Player character arrives in the Imperial City. There are no unavoidable quests which take place here, but it will be necessary for the Player to at least pass through on their way to somewhere else. For example, the Player will need to pass through it to meet Silk Fox in the Scholar's Garden. If the Player chooses to gain the favor of the Lotus Inquisitors—one of two routes to advance the main plot—they may also need to visit the Hostel to speak with Minister Sheng; although it is possible to complete this quest without doing so.

There are also two optional quests which begin in the Golden Way. One, The Outlander, will be introduced to the Player automatically when they pass through the Golden Way's main square; they will be repeatedly insulted by a servant and upon investigation, will discover that the Minister of Culture is trying to find someone able to withstand the confrontational debating style of Sir Roderick in the Scholar's Garden. The other quest is only available after the player has been to the Scholar's Garden and spoken to Silk Fox. This quest, The Play's the Thing, involves the Player taking a brief acting role in a play. It is obtained from a playwright named Incisive Chorus, who will be standing near the gate to the Market District. If the Player agrees to help him, they must go to the playhouse in the east of the area and speak with Thespian Phong. Also present in the Golden Way is Beggar Song, but he is not involved in any quests.

There is one bookstand in the Golden Way, Music and the Arts, located in the central square.

Error: Image is invalid or non-existent. 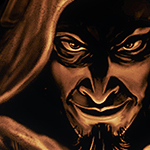