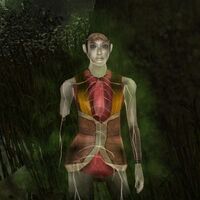 Ghosts are the restless spirits of the dead in the Jade Empire. Though they were once rare, the invasion of Dirge caused a sharp rise in hauntings, as the spirits of the dead suddenly became unable to continue on to the next spoke of the Great Wheel.

When humans die, their spirits normally return to the Wheel of Life, guided there by a being called the Water Dragon. Some, however, are unable or unwilling to heed the Dragon's guidance, possibly because they are angry at the circumstances under which they died, or because they are still highly concerned about their loved ones or about events in the physical world. These spirits become ghosts.

Ghosts exist in a state of constant suffering. They still possess all the drives that they had in life - hunger, thirst, the desire for social contact, etc. - but they no longer possess corporeal bodies, and thus can do little, if anything, to satiate their desires. If no remedy is found for their continued existence, most ghosts eventually turn feral.

Not all spirits succumb to bestial rage. A strong will can transcend death. These beings may have powers beyond any living foe, and intelligence to beguile and confuse.

Traditionally, ghosts could be induced to leave the mortal plane if the conditions that prevented their departure were removed. For example, the ghost of Ren Ming haunted the Imperial City Necropolis because of his rage, born out of the mistaken belief that his wife had deliberately poisoned him. If he could be convinced that his death was an accident, he would then be able to pass on. If peaceful removal was impossible, then certain weapons and martial and magical styles could be used to "dissipate" a ghost. This is only a temporary solution, however; only a handful of ghosts would willingly seek the Water Dragon after dissipation, and if the Water Dragon was incapacitated, then all ghosts would eventually re-form.

One of the duties of the Spirit Monks was to seek out ghosts and get them to turn back to the Water Dragon's embrace, either through negotiating with them, helping them find peace, or by force.

The assault upon the Water Dragon's temple in Dirge, coupled with the subsequent rise of the Lotus Assassins and their tendancies towards dark magic, caused an alarming rise in hauntings, and complicated the question of how to deal with the ghosts.

Retrieved from "https://jadeempire.fandom.com/wiki/Ghosts?oldid=9782"
Community content is available under CC-BY-SA unless otherwise noted.