Black Whirlwind is a mercenary formerly hired by Lord Yun who joined the the Last Spirit Monk as a follower.

Black Whirlwind grew up in an abusive household until he killed his father. After his father's death, his mother kicked him out onto the streets. He was once a champion at the Imperial Arena but left shortly after his brother Raging Ox's death. Black Whirlwind was a brawler of legendary stature, although the legends dwell as much on his drunken stupidity as his skill in combat. He was rude, crude and thickheaded, so much so that he has simply no understanding of what he could and could not do. While he was an absolute disaster at anything diplomatic, if someone needed to survive a suicidal battle against overwhelming odds, Black Whirlwind was the man for the job.

The Player meets Black Whirlwind along with Spear Catches Leaf at the temple in the Great Southern Forest during the quest The Sickened Forest. He attacks the Player, thinking that it is another ghost despite being warned not to by Spear Catches Leaf. After the Player fights back and holds off Black Whirlwind in battle, an impressed and astounded Whirlwind realizes no ghost could have put up such a fight and halts his attack.

After talking to the Player, Black Whirlwind agrees to work with him/her to discover the cause of the problems plaguing Lord Yun's forest and to resolve it. After either the Forest Shadow or the Mother is destroyed, Black Whirlwind, his work for Lord Yun complete, decides to sign on to work with the Spirit Monk, rightly anticipating that there will be plenty of fighting to do wherever he/she goes next.

The Black Whirlwind accepted a job hunting demons for the Celestial Bureaucracy, but the ensuing red tape frustrated him so much that he gave up and made for the Mysterious East. Shortly thereafter, the Empire received a great influx of Outlanders, many of whom were missing limbs and other body parts. He returned to the Jade Empire several years later, but this time he came from the west. He couldn't explain how he did it, but he was the only person unsurprised to arrive back where he started. Expressing a newfound hatred for a people who couldn't make a decent bowl of wine, the Black Whirlwind vowed to never again leave the Jade Empire. A week later, he got bored and headed off to the north.

Spear Catches Leaf: "You've just had the... unexpected honor of defeating the Black Whirlwind, the self-styled deadliest mercenary in the Jade Empire".

Player: "What earns a mercenary a title like "deadliest?""

Spear Catches Leaf: "The tales say this man once stormed an entire fortress alone, naked, and screaming his defiance into the night".

Black Whirlwind: "Ha! Scared the tar out of those border guards! But they botched the story; I was naked, screaming, *and* I was dead drunk. I wont stop until they are ankle deep in blood, Head first".

–Conversation between Spear Catches Leaf, the Player and the Black Whirlwind 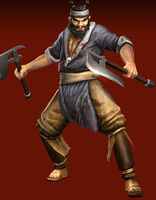 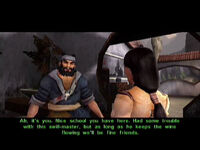 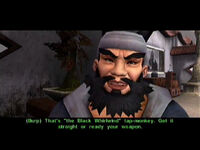 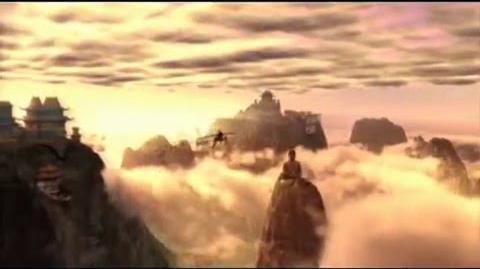